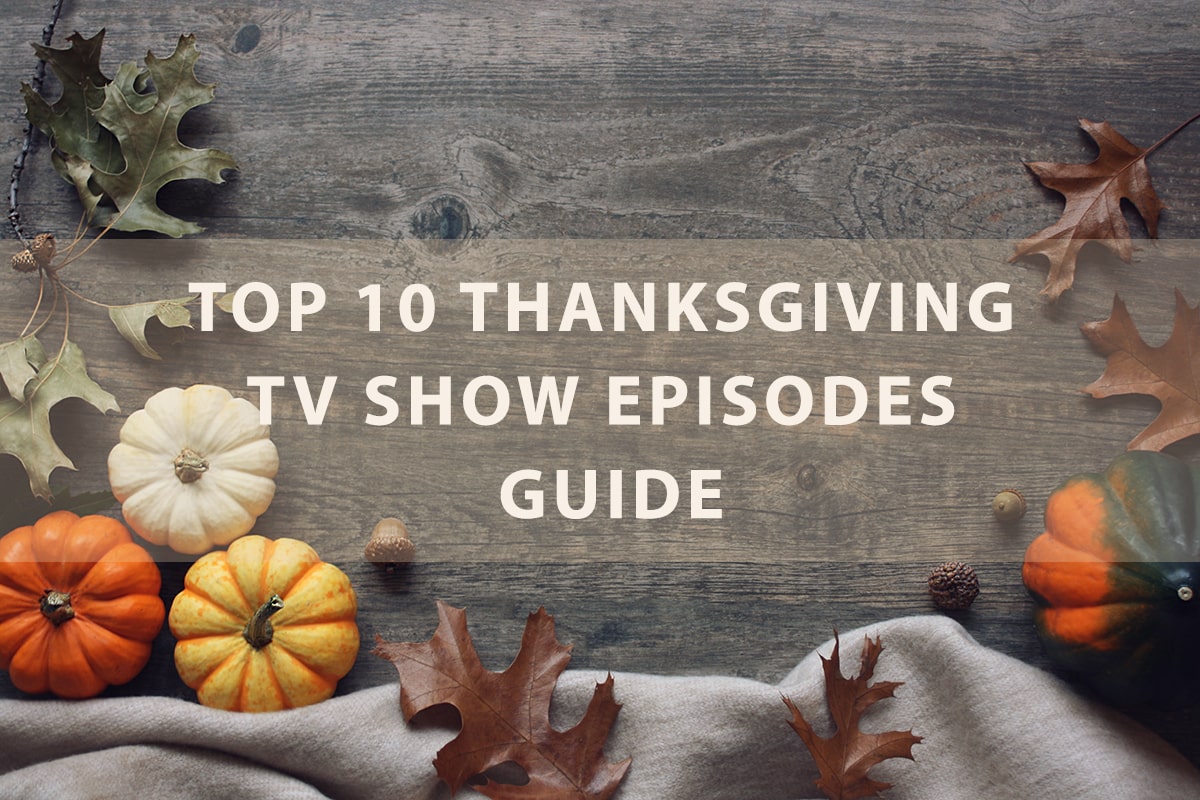 Wondering what to do once Thanksgiving dinner is over, you’re stuffed and getting into your comfy pants? Many TV shows take a break from their regular storylines and put on specials for Thanksgiving! So, here’s our list of ten Thanksgiving themed episodes that are worth watching over and over again from some of our favorite shows!


In this episode, we see the Friends cast recalling Thanksgivings when they were younger so it’s kind of a throwback. Often said to be one of the best episodes of the entire show, we see Ross complain that his divorce made Thanksgiving the worst holiday ever, which prompts the rest of the group to share their bad Thanksgiving stories. You’ll also see Chandler recalling his parent’s divorce, Phoebe talking about her past life, watching Joey get a turkey stuck on his head (which is a classic scene of the show!), and Monica sharing how she cut off Chandler’s toe after dropping a kitchen knife. This episode shows us hilarious flashbacks and tells an important lesson: no matter how bad a holiday might be, a time will come when it will be a great story to tell!


The third season of How I Met Your Mother has one of the best Thanksgiving-themed episodes ever. The ninth episode called “Slapsgiving” shows us the first Thanksgiving after Marshall and Lily got married, and the first-ever Thanksgiving that the whole gang spend together. The name of the episode revolves around the happenings from the ‘Slap Bet’ episode, where Marshall tells Barney the third slap will be coming on Thanksgiving. This tension added to the ongoing story arc between Ted and Robin since their breakup makes this an episode that is dramatic, romantic, and most importantly – funny!


In the eighth season of Everybody Loves Raymond, you can follow what happens when the Barones visit the MacDougalls for Thanksgiving. While Amy and her mother prepare dinner the whole plan goes sideways after a bird hits the front of the house, and Pat decides to put it out of its misery. This brings forth a conflict between the MacDougalls and Barones who don’t agree on how to handle the bird, and whether or not to serve it up for Thanksgiving!


One of everyone’s’ favorite police sitcom also has a Thanksgiving episode. In the tenth episode of the first season features Amy Santiago preparing an elaborate Thanksgiving feast for the precinct, with the aim of getting captain Holt to become her mentor. Jake, who hates Thanksgiving, tries to get more cases so he has an excuse not to show up and his prayers are answered when he and Holt leave to investigate a case of stolen money right before dinner. The dinner was a flop, since Amy’s cooking didn’t sit well with anyone, and most find excuses to avoid eating. The episode is hilarious but also heartwarming with a lesson or two in friendship and teamwork to boot.


In this Thanksgiving special of Bob’s Burgers, Bob has to deal with a Thanksgiving saboteur. Bob wants a perfect Thanksgiving dinner and spends a lot of time preparing the turkey to be perfect, only to find his dream turkey in the toilet! The whole family insists they didn’t do it, and Bob prepares a second turkey, only to find it in the toilet again. After a third turkey that manages to be prepared this time, we get to find out who the saboteur really is!


While this episode does have a Thanksgiving dinner in it, it’s actually a time-jump and opportunity to flash back and explore relationships and memories from the previous four months. Starting in July some painful memories are explored like when Jane finds out there is a problem with baby Mateo. The episode ends with a Thanksgiving dinner at the Villanueva home, where Petra and Raphael are both there and everyone has a chance to reflect and say what they’re thankful for.


The whole gang wants to have a nice Thanksgiving, but some bad blood and old enemies are standing in the way of it. Wherever they go to buy things for Thanksgiving, their old foes are working and they can’t buy what they need! So, to avoid a bad holiday, they all decide to make amends, call all their foes to apologize and make peace. As you can expect, it all descends into chaos pretty quickly, and it’s hilarious to watch.


This episode revolves around Denise and the Thanksgivings of her past, from the first Thanksgiving where she realizes she likes girls back in 1995, then to 2006 when she comes out to her mom, throughout the family struggles to embrace the fact that Denise is gay. The episode continues all the way to 2017 when she and Michelle are dating. By the end her family has finally come to terms with this, and they all manage to share a genuinely happy and wonderful dinner together.


This episode of Grey’s Anatomy revolves around the struggles the interns avoid facing head-on while Thanksgiving is right upon them. Izzie is preparing dinner for the others and Burke is helping her, but Christina, Meredith, and Alex decide to stay at work as a Thanksgiving avoidance tactic! George, on the other hand, has to go through with the family traditional turkey hunt and has to shoot the bird himself. This episode shows that while Thanksgiving is always expected to be about getting together, sometimes, life will take you in totally different directions.


Seinfeld is a classic 90’s sitcom and of course has a Thanksgiving day episode. This particular episode revolves around the days leading up to Thanksgiving. Kramer is disgruntled that so many family-owned stores are closed and tries to save a shoe repair store owned by Mom and Pop by bringing them all of Jerry’s shoes and sneakers. Elsewhere Elaine manages to get her boss, Mr. Pitt, into the Macy’s Thanksgiving Day Parade, which is something he has always wanted, and Jerry struggles with getting a straight answer on whether he’s invited to a pre-Thanksgiving party or not!

What is your favorite Thanksgiving episode that you’ll never get tired of? Which episodes have we missed that should definitely be included? Let us know in the comments.